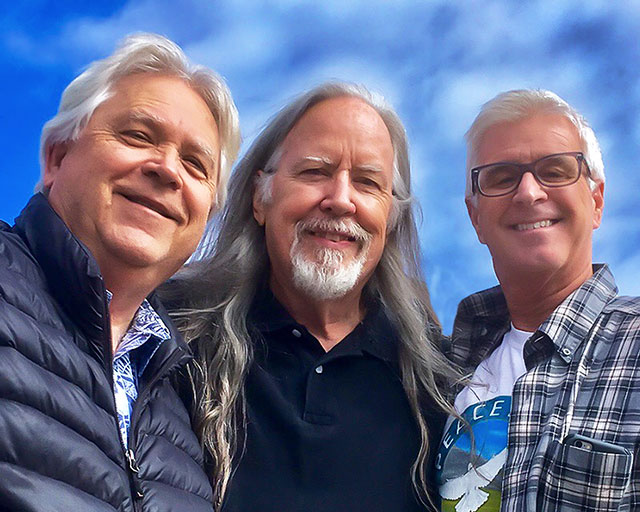 The Cache Valley Drifters have been pushing the boundaries of American acoustic music for over four decades. CVDʻs sound is a blend of a wide range of musical styles and influences with a focus on vocals rich with harmony. While their music sits on a solid foundation of Bluegrass and Folk, they create a collective alchemy of all musical interests the individual members bring to the table. The result: performances that cover a lot of musical territory while maintaining a common thread that can only be described as the CVD style.

Their shows are as likely to include modern bluegrass interpretations of songs by Greg Brown, Etta James and Woody Guthrie, as they are to feature traditional bluegrass tunes and songs by the late folk-singer Kate Wolf. CVD’s association with Wolf is natural considering that the band played and recorded with her from 1974 until her passing in 1986. CVDʻs performance history is perhaps a bit more varied than most bands in Acoustic Music. They have shared concert and festival stages over the years with artists including Doc and Merle Watson, Del McCoury Band, Emmylou Harris, Newgrass Revival, Stephane Grappelli, David Grisman, Alison Krauss, Peter Rowan, etc. – and with artists you might not expect: The Allman Brothers, Dave Mason, Little Feat, Willie Nelson and Ricky Nelson.

CVDʻs self-titled LP, THE CACHE VALLEY DRIFTERS, was released on Flying Fish Records in 1978 and the band would go on to record two more LPs for Flying Fish. STEP UP TO BIG PAY was released 1979 and the live recording TOOLS OF THE TRADE (Live at McCabeʻs Guitar Shop) in 1981. The band took a break from 1985 to 1992. In 1996 they released their first CD, WHITE ROOM, which included their take on Creamʻs song of the same name (and featured John McFee of the Doobie Brothers). WHITE ROOM received airplay on radio stations across the globe and led to their next CD, MIGHTYFINE, featuring world-class fiddle and banjo player Dennis Caplinger (Bluegrass Etc.). Both CDs were released in Europe on the German label Taxim Records, and the band subsequently toured throughout the continent. CVDʻs newest release LIVE IN GERMANY (2012) documents a 1999 concert in Viersen, Germany, again with Dennis Caplinger.

In 2000 the band received an out-of-the-blue honor when their 1979 version of “Cumberland Blues” was picked by the Grateful Dead to be the first cut on STOLEN ROSES (Grateful Dead Records), a collection of the Dead’s favorite covers of their songs by other groups. They are in good company here with, among others, Bob Dylan, Elvis Costello and the Stanford Marching Band.