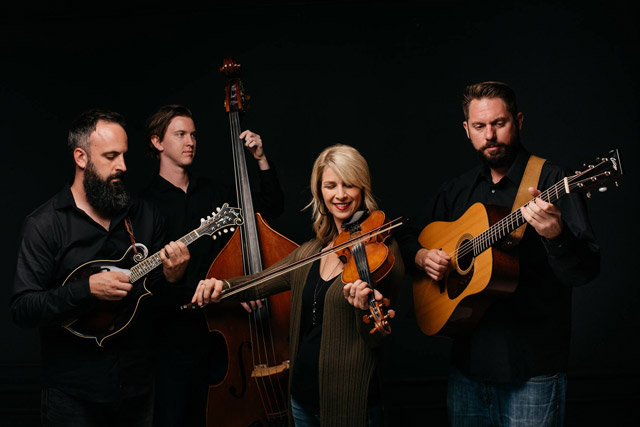 One Button Suit is a Sacramento based string band featuring a unique blend of established musicians. Weaving traditional sensibility with a modern twist, OBS presents a repertoire of original songs, bluegrass standards, and rock classics. The musicians in the band have been playing in various projects with each other for over a decade, forming strong bonds and a cohesive sound. They are currently recording their second album and are excited to share it with listeners. The band is excited to be back at Parkfield to perform!

Tom Shewmake (mandolin) has performed for over 25 years and has shared the stage with the likes of Keith Little and Dan Crary. As a teenager, he started his own family band and participated in the CBA’s Kids on Bluegrass program. He has created a unique genre bending style of playing crafted from a combination of traditional and modern techniques that can be heard on his new record of original material titled “Blindside”.

Ben Kopf (bass) earned his Bachelor’s of Music at Berklee College of Music in Contemporary Writing and Production with a minor in Conducting. While in Boston, he was a part of the Hillary Reynolds Band, now known as Peridot, as well as the Boston based bluegrass band The Whiskey Boys. In recent years, Ben has worked as a professional performer, producer, and conductor in the Sacramento area.

Melissa Troberg Lincoln (fiddle) began fiddling as a child, competing in the fiddling circuit at just six years old. She went on to win Regional and State competitions, as well as ranking Nationally. While earning her BA in Liberal Studies, she began teaching bluegrass, old-time, and Celtic music, going on to develop curriculum and after school programs. Her love for music spread to her four children, who all enjoy playing and listening to old time music.

Brian Burke (guitar) was not introduced to bluegrass music until he was in his twenties. At that point, already a seasoned performer, he had focused most of his studies on blues, flamenco, classical, and rock. After falling in love with the high lonesome sound and the California community of all-night jammers, he never turned back. His diverse background lends to his unique approach of playing the guitar.