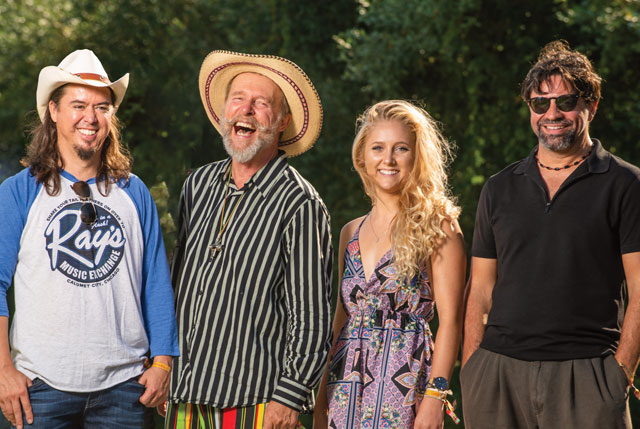 Joe Craven is an award winning creativity educator, fashion consultant, multi-instrumentalist and prankster savant. In addition to having worked with David Grisman for almost 17 years and Jerry Garcia for 4 of the last 5 years of Garcia’s life, Joe has recorded and/or performed notably with Vassar Clements, Rob Ickes, Alison Brown, Tony Rice, Tony Trischka, Darol Anger, Mike Marshall and other Bluegrass luminaries. Joe has also been a Master of Ceremonies for Telluride Bluegrass, Rockygrass and for 12 years and running, Delfest, in Cumberland, MD. “Everything Joe touches turns into music” says mandolinist David Grisman. joecraven.com He is a featured artist/educator in the PBS television series, Music Gone Public, and Joe has created music and sound effects for commercials, soundtracks, computer games and contributions to several Grammy-nominated projects. He’s the Executive Director of Vocáli Voice Camp and RiverTunes Roots Music Camp in California, the recipient of a Folk Alliance Far-West Performer of the Year Award and the Swannanoa Gathering’s Master

Music Maker Award in North Carolina where Joe has taught for many years. Whether with classes in Costa Rica, corporate heads in Contra Costa, Goodwill Industries, The United Way, young men in a juvenile detention center, families in homeless shelters, university lectures in Washington, jamming with Gnawa musicians in Morocco, on stage at Carnegie Hall with Stephane Grappelli, or on a ladder at the Royal Concert Hall of Glasgow singing with an angel food cake pan in front of thousands of school kids in Scotland… no matter who and what Joe’s connected with, he’s at home and loving every minute.