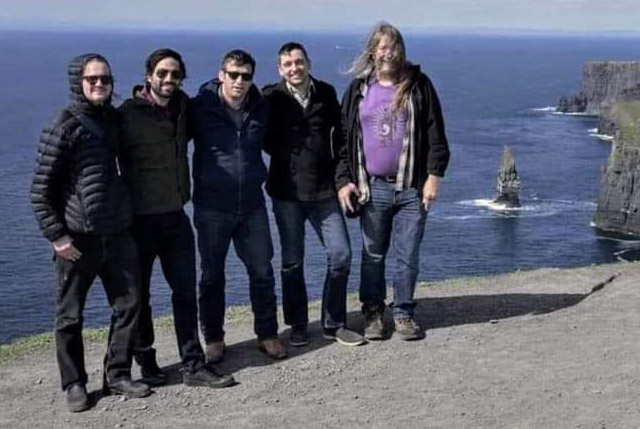 Jeff Scroggins and the Scroggdogs is a hard core traditional bluegrass band founded by internationally acclaimed five string banjo player Jeff Scroggins. It is built on the gritty, raw energy and excitement of the West Coast bluegrass scene, it’s members are among the cream of the crop of amazing California musicians that were and continue to be inspired by Vern Williams, Ray Park, Rose Maddox and others from the golden era of bluegrass in the Golden State.

Scott Gates(mandolin) is one of the most exciting young pickers on the bluegrass scene today. His phenomenal picking and singing have made him a well known figure in his native California since he was a young boy, and his relentless pursuit of music has allowed him to hone his craft to become a world class mandolin player, singer and performer. Scott grew up in the Lucerne Valley in the Southern California desert between LA and Bakersfield, where he was also heavily influenced by the traditional country music scene that grew up there in the 1960s. The music of Buck Owens, Merle Haggard and Rose Maddox had as much influence on his style and musical aesthetic as did his beloved bluegrass.

Yoseff Tucker’s(guitar)early life exposure to traditional bluegrass and American roots music came courtesy of his grandfather who moved to Central California from the Ozarks in the early 20th century. His first guitar came to him while he was still in diapers and an appreciation for music laid a great foundation in his life. After years of playing rock ‘n roll, Yoseff found his way back to bluegrass music and in a matter of years created a life centered on the proliferation and progress of bluegrass. Yoseff has been named the Northern California Bluegrass Society Guitarist of the Year four times and Male Vocalist of the Year twice. Together he and Scott  provide the brother duet singing that gives the band it’s high lonesome and high octane hillbilly sound. His style is perfectly suited to what the band is doing.

Zach Sharpe (bass) was born into bluegrass and was raised by “pickers” in the woods of Indiana. After moving to California for high school, he eventually landed in Sacramento as a young adult, where he was almost immediately adopted into the MacNasty family of funk with Larry and Allie Davis. Through the sounds and soul of R&B music, he gained new insights into bass playing, rhythm and music as a whole. Currently residing in San Francisco, Zach finds himself at the helm of his American Standard custom bass for other local bands like Supermule and Front Country. His musical influences range anywhere from Flatt and Scruggs, Jimmy Martin, Vern Williams and Tony Rice to The Boxcars, James Brown, Tower of Power, Bill Withers and Outkast. These incredible musicians have had a profound effect on Zach, but nothing could have been more inspiring than his family and their close family of bluegrass pickers.

Jeff Scroggins (banjo)has won numerous contests and awards in his career, including the prestigious National Bluegrass Banjo Championship and dozens of state, regional and local banjo contests. He is an internationally known performer who has taken his fiery banjo style to stages around the world. Jeff is also well-known as a banjo teacher and is in demand as an instructor at music camps in the US, Canada and Europe. He brings to the band a background steeped in the traditional country music of his family. His grandfather, J.M. Cary was a well-known local country singer and guitarist who performed with Earnest Tubb and his uncle “Ace” Sewell was a legendary contest fiddler. Jeff grew up hearing them play and sing at family gatherings and these were some of his first musical influences. In his teens his grandfather taught him to play guitar, and soon thereafter he began playing in local heavy metal bands. At the age of 20 he bought a banjo and it quickly took over his musical life and brought him back to traditional music. Jeff has won more than 50 banjo contests, including the prestigious National Bluegrass Banjo Championship.